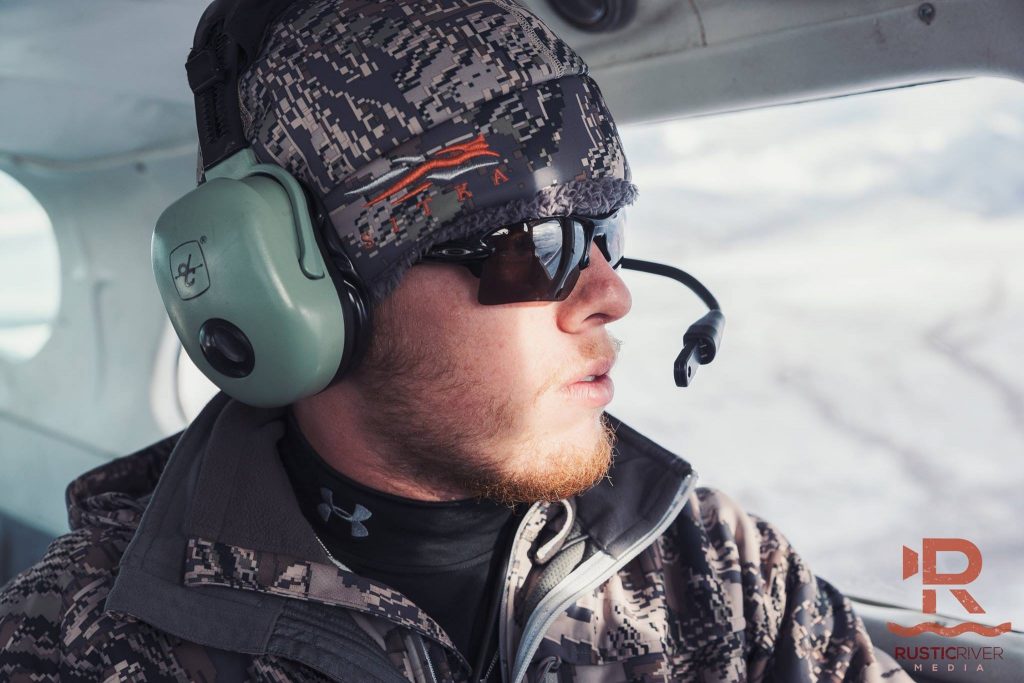 I’m writing this blog entry on my phone while sitting beside a swift running river that’s flowing through the tundra of the Alaskan Mountain range. I realize that this won’t make it online until sometime next week when I get internet service, but I figured that I’d share with the world my experience so far filming in this environment.

I’ll start by saying this: I’m currently beyond miserable and I think that might even be an understatement. A trip like this is not easy. You have to plan way ahead, researching the climate, the average temps and weather for this time of year, what gear to bring and so on, because every move you make can cost you in this harsh environment. Despite my busy schedule, I did my due diligence before coming here and I got the gear I thought I needed. So far, I’ve used absolutely everything I’ve brought; all of my Sitka clothing, my Streamlight flashlight, my headlamp, solar chargers, LifeStraw filtered water bottle, etc. Any mistake made in this part of the world could cost you your life, so it’s crucial that you prepare for rain, snow, cold temps, long hikes, potentially sickening drinking water, and so on. The lack of cell phone usage and the several day long horseback ride back to the real world means there is no room for error. 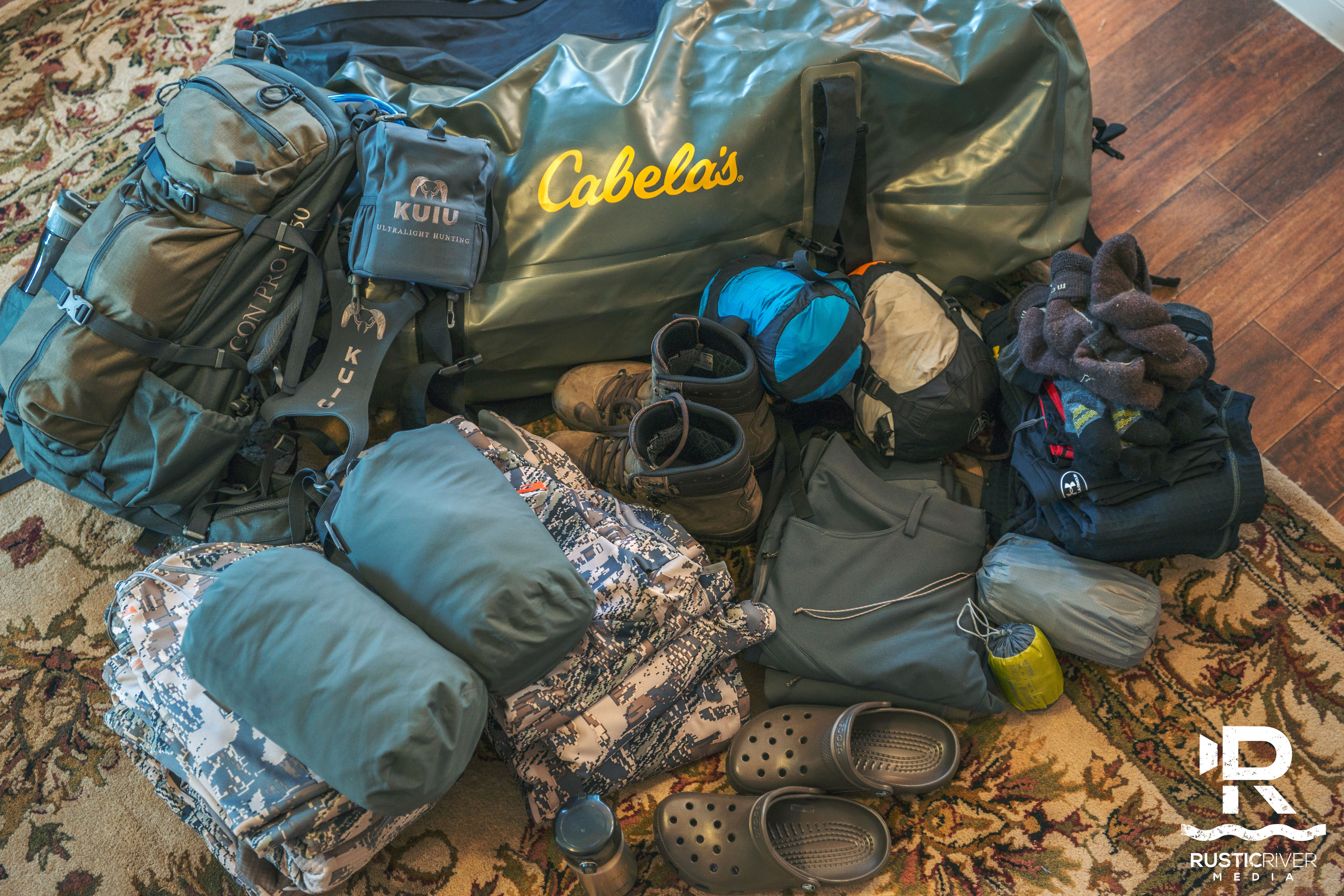 I purchased a pair of high-end boots last year that I’ve literally worn all over the world. They’ve been great so far, but I’ve yet to test them out in a lot of water. I just haven’t been out in a situation in the last 12 months that forces me to find out what I found out here, which was that these boots are NOT 100% waterproof as they claim to be. Despite treating them with Mink Oil in the off season, these boots got absolutely soaked inside on the second day here and they haven’t dried since. Now think about this for a minute; I’m walking 6-8 miles a day up and down mountains with 60 pounds of gear on my back and the temperature gets into the teens at night, all while my feet are constantly wet. That’s not ok! I can honestly say that after 5 days of putting on ice covered shoes every morning, I’m slowly losing any motivation I had for this adventure. Great equipment is so essential on trips like this, and it turns out that my boots are not so great.

Now that I’m finished venting about my misfortune, I want to tell you about what has made this trip so great thus far. The horseback ride into the first spike camp was a long one. About four hours into the ride, the vastness of the land you are entering suddenly hits you. It’s at this point that you realize you are literally entering the middle of nowhere and there is absolutely nothing anywhere around. It’s kinda scary at first because you start to ask what-ifs. “What if I didn’t bring enough warm clothes?” “What if my horse dies?” “What happens if we get caught in a huge storm?” It’s these questions that pop into your head when you finally understand how truly small you are in the wilderness around you.

After about 6 hours of riding, it got pitch black out and the horses started acting up. We had to stop our trek and tie the horses up for the night because traveling any further in the dark than we had already gone would be dangerous. We started a fire, sat next to it and tried our best to stay warm for the night. The temperature dropped drastically into the teens and everything we had became covered in ice. Needless to say, we didn’t sleep much and we couldn’t wait for the sun to come up so we could get moving again. 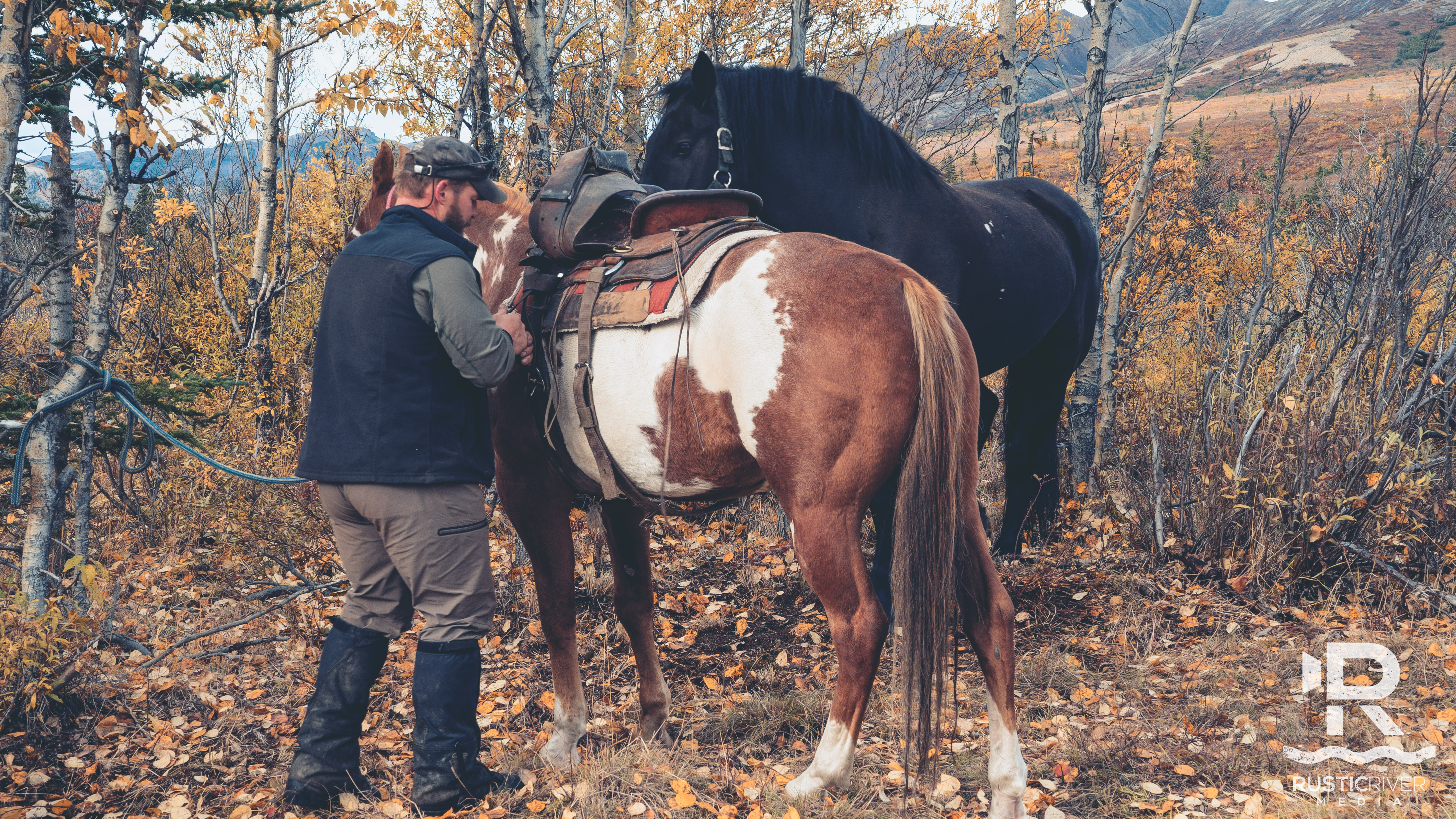 The next day we finally reached our first spike camp which is on the same river I’m sitting beside now. We haven’t left this camp yet since we found game in the area, but we are packing this afternoon to head to Main Camp tomorrow. Every day we cross rivers, walk through the tundra, and hike for miles through the swampiest mess you’ve ever seen. When you think about Alaska, you typically think of shale rock and snow, not murky swamp water and soft ground. I honestly can’t adequately describe what it’s like to walk in this type of tundra. Because this part of Alaska is so far north, the ground is saturated due to the permafrost that lies just a few feet below the surface. This thick layer of frozen ground prevents rainwater and melting snow from soaking through the ground, thus making the September terrain a giant puddle full of waist high weeds and tussock. It’s very tough to walk through because every step is on uneven ground and you have to fight to keep your ankles from rolling and your feet from sinking. A hike through this makes 8 miles feel more like 26 and leaves you with burning calves and a tight back. Every direction we’ve hunted from this camp has been this way.

The first day we hiked out, we saw three grizzlies, six moose, countless caribou and two coyotes. These creatures were exactly what we came here for and spotting them got my heart racing. We actually elected to make a run on one of the bears that was a little over a mile away, but by the time we crossed through all the ridges and streams, the bear had made its way into hiding. We never saw him again that day, but I can promise you that my holster was unclipped while walking through the alder bush where we had originally spotted him. Being in his territory is an eery feeling. 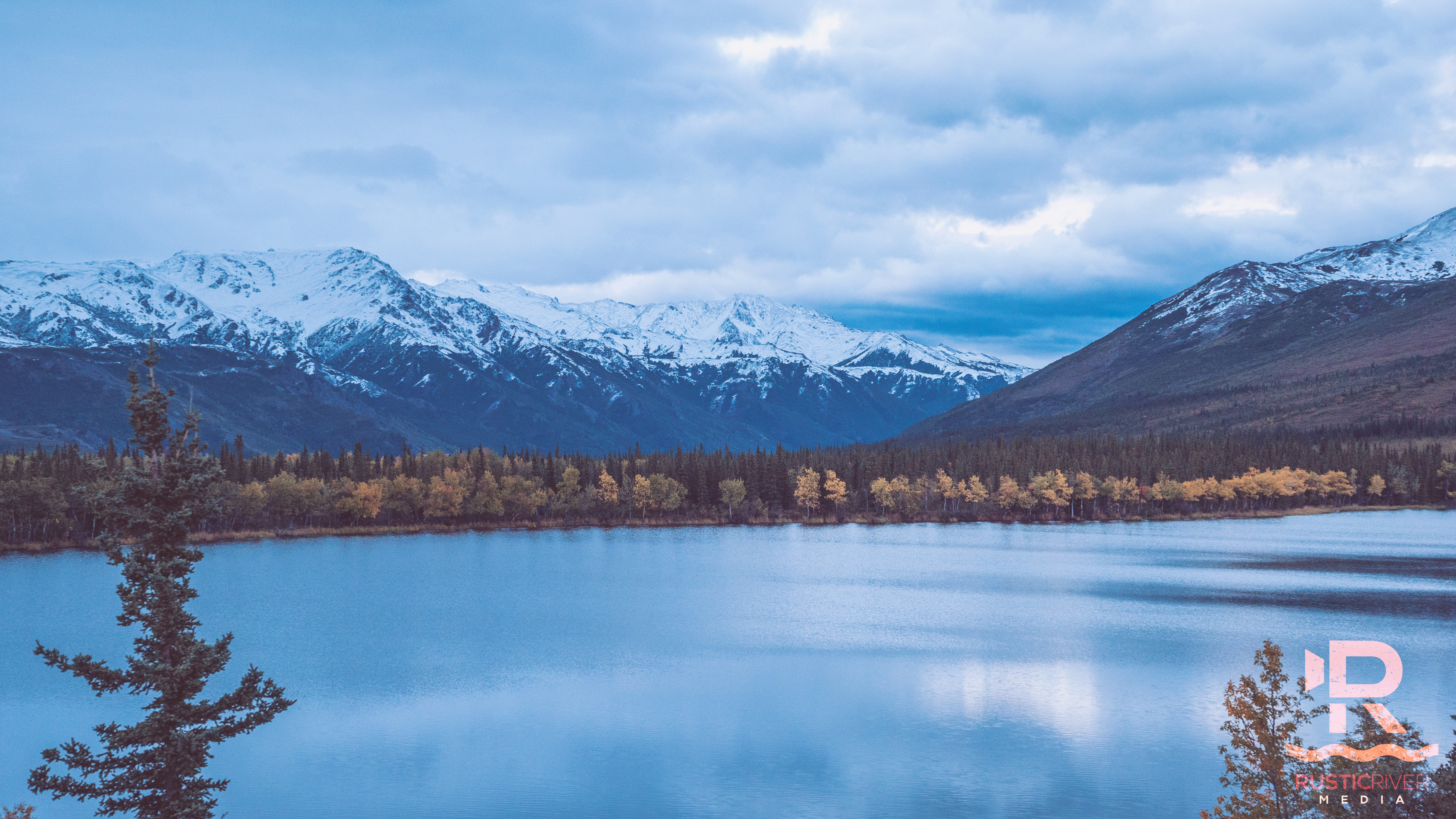 The next day we hiked a couple of ridges over and happened to spot a shooter moose. He was a gorgeous bull pushing 60″ and we knew he would make a great harvest because of not only his size, but also because of how mature he was. It had been pouring on us all day (not helping my boot situation) and by the time we had spotted him the fog had set in, making it hard to pick him up on camera. We made the decision to bail out of the area without spooking him so we could try again the next day. It took us four hours to hike back to camp that night, putting us back at 12:30 AM. We still had to cook dinner and clean up when we made it to camp before we could hit the sleeping bags for the night. Keith (the host of The High Road) and I were stoked when it finally came time to go to bed.

The next day the weather broke, so we made another run on the bull we had spotted the evening before. Sure enough we found him in a bowl in a valley between two mountains. He was bedded between two other bulls behind some brush. We snuck our way down the valley, cutting the distance between him and us. We finally got to around 360 yards and decided that was close enough to attempt a shot. I set up all the cameras and mics and Keith laid down prone with his gun resting on his backpack. The guide blew a call and all three moose stood up, locking their eyes right on us. The guide waited a few minutes and blew again, causing the bulls to split up. Keith took some deep breathes, relaxed his body and punched a bullet straight into the high part of his shoulders. Normally it takes several rounds to put down such a large animal, but Keith’s shot dropped him instantly. It was an amazing moment to catch on camera.

I’ve never seen a moose that close before and to walk up and touch its fur and antlers was mind blowing to me. A moose is so much bigger than I had imagined and I was almost upset that we had killed him because I knew that this was quickly going to become a late night. It took all four of us somewhere around 2-3 hours to quarter him out, leaving another 4 hour hike back. Let’s just say that it was a sleepless night.

On the way back to camp, I finally got to witness something I’ve been looking for a lot in the last few years; the Northern Lights. Many times on our hike back in, we would just stop and turn off our lights so we could witness the streaks of green soaring across the star covered sky. It was incredible to say the least and is definitely a wonder that God gave us to enjoy on nights like that.

Today the guides are riding horses into the bowl where we quartered the moose in order to pack his meat out. Keith and I stayed back at camp to shoot more video for the show, which I’m completely ok with since my feet can’t ever seem to get warm! It’s been an unreal experience thus far and I’ve seen country that most people will never get to gaze their eyes upon. Keith had always told me that hunting in Alaska is the most fun time you’ll ever have being miserable. I’m finding out for myself that his statement was dead on. Despite the cold, the wet, the wind and the rain, I wouldn’t want to be anywhere else. Every animal we’ve seen are as wild as it gets and the mountains are beyond any possible description. To me, this is what it was like to live hundreds of years ago. Clean air, open terrain, horseback riding and nothing anywhere around. These are exactly the type of adventures I live for. 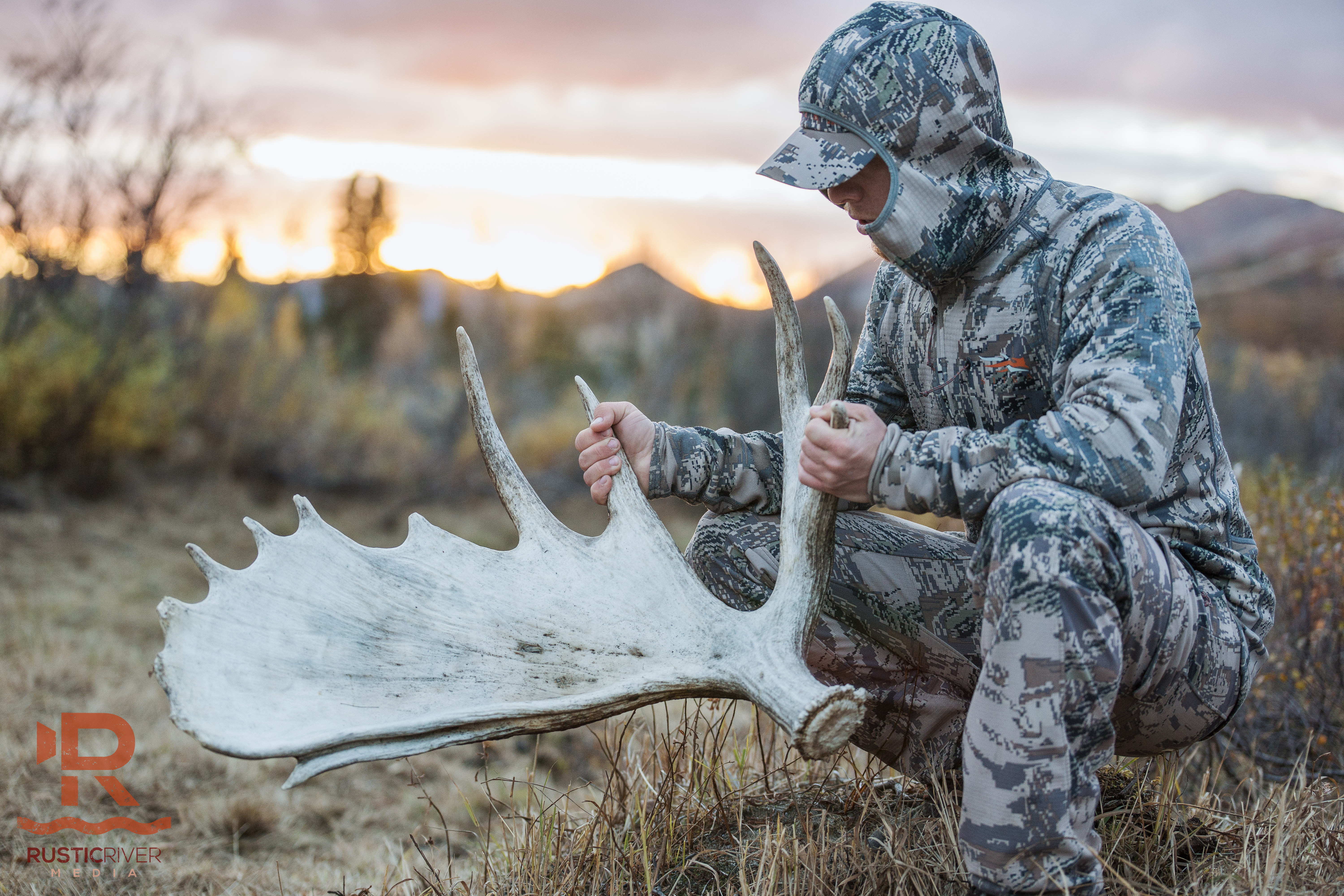 Tomorrow we ride out to Main Camp, which is about 5 hours from here by horseback. Our goal is to tag a grizzly in the next two days so we can put our remaining energy into hunting sheep in the high country. I can’t wait to see what lies beyond these mountains and what stories God has for us to tell. I know it’ll be exciting to write about our remaining time here as it unfolds before me. Until then, let’s go bear hunting!