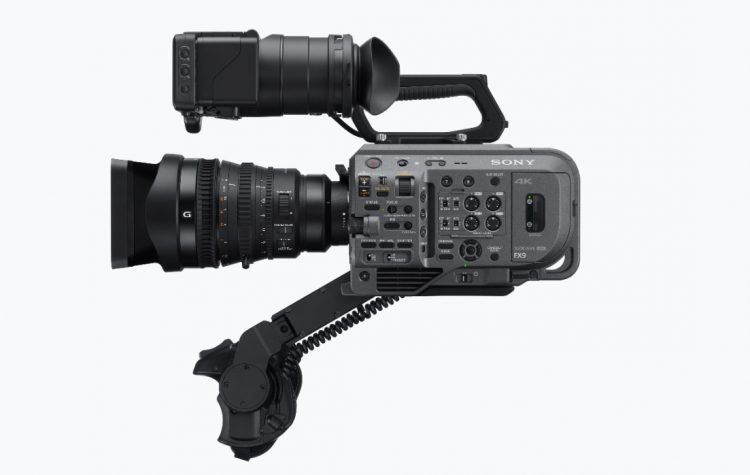 15 Thoughts on the New Sony FX9

Today Sony announced the new FX9 full frame cinema camera. This is not a replacement for the FS7/FS7II, but rather a full frame version of those cameras with a few new tricks up its sleeve. There are numerous articles out there that will give you all the specs and info on the camera, so I’m not going to do that here. But, I did want to share 15 thoughts I have on the new Sony FX9.

1) Full frame is a great addition. It’s not everything and I would likely still use the camera in Super 35 mode a fair amount because Super 35 makes more sense for documentary work and documentary lenses like Canon’s 18-80 Cine Servo Zoom lens. But, having full frame on a camera like this is going to be great for other types of shooting.

3) The screen has been updated to a higher resolution which was one of my biggest complaints about the FS7, so also great.

4) I run four channels of audio on my FS7 all the time, but two of the channels have to be adjusted in the menus. On the FX9, all four channels can be controlled on the body and that’s a huge win.

5) LUT monitoring now works in S&Q mode as well as during playback which was something that was missing in the FS7 and that’s a nice addition.

6) Custom white balance and different ISOs can be adjusted in CINE EI mode which is the camera’s best shooting mode. On the FS7, you were locked to only 3 white balance options in CINE EI and couldn’t change ISOs, so that’s a huge win as that has been one of my biggest complaints about the FS7.

7) Dual native ISOs is great. Having a base ISO of 800 will help in bright lighting conditions while a second base ISO of 4000 will help a ton in lowlight situations. I’ve never found the FS7’s base ISO of 2000 to be a problem, but having dual base ISOs like this is a nice plus.

8) They kept the design similar to the FS7 so that the FS7’s batteries, XQD cards and most accessories will work on the new camera. That’s great if you’re a current FS7 shooter who wants to upgrade to the FX9.

9) I hate the FS7’s handgrip and wish Sony had invented something better for the FX9, but at least they gave it a hand strap, so that’s something. That being said, I would still much rather rock a Canon 18-80 on the FX9 like I do my FS7II because the lens’s built-in handgrip is far more comfortable to run than using the Sony’s handgrip/extension arm design.

10) Despite the fact I don’t like that they kept the same handgrip design, I am glad that they kept the same shape and size of the FS7. I also think the grey looks pretty sweet and similar to the VENICE. It is a little longer than the FS7 and some of the buttons are different, but overall it’s very similar in design and that’s a great move because the FS7 has remained arguably the best designed camera for shoulder mounted work out there. I’m glad they stuck with that instead of making this a modular box camera like a RED that needs major rigging to work well in the field.

11) I feel disappointed in the recording formats. Don’t get me wrong, my FS7’s 10-bit 4:2:2 high bitrate codec is the bee’s knees for the vast majority of my work and this camera has that, but wouldn’t it be nice to have internal raw or at least external raw to a recorder without needing a bunch of other stuff when you want more control over your image?

12) Speaking of raw, one of the biggest issues with the FS7 is that you needed to buy the $2,500 gigantic extension back to unlock raw. And, to power the camera with that extension unit you needed to also buy and use V-lock batteries. On top of that, raw cannot be recorded into the extension back directly, so you had to purchase a raw recorder (like an Atomos) with batteries to power it and SSD cards to record to. So by the time you had everything you needed to record raw, you’ve essentially doubled the size and weight of the FS7 and spent like $5,000 just to do it. And, to top it off the raw was only 12-bit and didn’t hold up as well as the internal 10-bit codec, so nobody ever used it. With the new FX9, you get 16-bit raw now which is great, but you still have to buy an extension back, V-lock batteries, a raw recorder, batteries for the recorder and SSD drives. So once again the camera is doubled in size and weight and you’ve spent half as much to do it as the camera itself costs. That’s crazy. So, if you want raw, you’re better off buying the C200, C500II or something like a Blackmagic, RED or Panasonic VariCam LT.

13) Not giving the FX9 higher resolutions or higher frame rates than the FS7 was a misstep in my opinion. While I do appreciate that the 4K is downsampled from 6K which is sure to look good, the fact is it doesn’t offer any higher frame rates or resolutions than their 5 year old FS7. I don’t know if I’d shoot much more than 4K right now and I don’t use high frame rates all that often, but I do think that keeping those out of the FX9 only hurts the camera’s future. When you bought the FS7, you were buying one of the first 4K 60p capable Super 35 cinema cameras on the market which made it very future proof. The 180p HD was also a great asset, but that was 5 years ago. Times have changed and other brands have caught up. Just look at Canon’s new C500II which shoots full frame 5.9K raw internally. That’s future proof and is why the C500II will be relevant for the next 5-7 years, maybe even longer. By capping the FX9 at the same codecs, frame rates and resolution as the FS7, it’s not a very future proof camera which makes it a tougher camera to invest in then the C500II, despite the fact that the C500II is more expensive.

14) Autofocus is great, but you control it using the joystick on the FX9’s handgrip. I can’t imagine how frustrating that would be in a real world run & gun shooting situation. I would much rather pull focus manually which is what 90% of all cinema camera operators would rather do, so while I’m glad it has great AF, I just don’t see myself ever using it much. I’ll save that for my mirrorless cameras.

15) Not including real IBIS was actually a good move. I don’t know if any cinema cameras will ever get true IBIS because to have it you have to have a loose sensor and that creates potential problems, like filming in a bouncing boat where IBIS isn’t enough to compensate for the shake and the sensor just bounces up and down thus creating major issues in your shot. IBIS is great for small handheld cameras, but on a cinema camera it has too many potential downsides. That’s why the GH5S for example doesn’t have it. I think that was a good move by Sony to leave this out, but their software based IBIS to me looks like a gimmick and I could never see myself using it. I can’t imagine handing shaky footage over to a production company that’s hired me as a freelancer and saying, “Here you go! Just download this one program and have it stabilize all the footage for you and you’ll be good to go!” No way would that look good on my part as a professional.

Now that I’ve given you my thoughts, I guess I should tell you whether or not I’m going to be picking one up. I think the answer to that is yes, but not anytime soon. My FS7II has long been paid off and is still making me money today. Nobody ever watches my footage and says, “If only that was shot in full frame”. The FS7 to me is still an incredible camera and will continue to get me work for years to come.

The FX9 looks like a great camera, but it’s missing some things that I really feel Sony should have added to make it more relevant in the market. It’s frustrating that internal raw, higher frame rates in 4K/HD and higher resolutions were omitted and I think it was a misstep on Sony’s part. That being said, there are some things on the FX9 that would make my work easier in the field and I would appreciate the dual native ISOs, so I likely will get one at some point, but it could be a year or two from now. In the meantime, I’m going to keep chugging away with my FS7II until the time comes that it makes financial sense from a business standpoint. When that will be, well, only time can tell.

Thanks for taking the time to read this blog! I hope you found this information useful and if you’d like to read more content like this, bookmark my website and be sure to join my Facebook group Filming with Josh where we talk all about tips, tricks and how to make flicks. I’ll see you there!